Our aim: Minimization of vehicle weight and maximization of payload with optimized energy storage and highly efficient electric drive at high safe driving conditions in the urban sector. 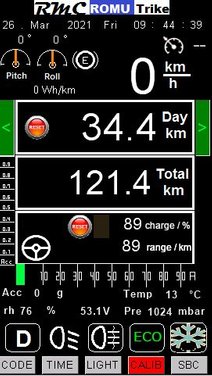 button {SBC] = Activation of the electrical brake for holding position if velocity becomes less than  1 km/h while brake lever was pulled. After releasing the twist grip and after that the brake lever the vehicle will hold position. By turning  the twist grip again without pulling the brake lever the position hold will be quit and the vehicle can be accelerated again. Braking lights are automatically turned on while position hold. The required braking momentum and thereby the current , which is evenly distributed to the motor coils, is adjusted in order to minimize energy loss and to avoid overheating of the motor coils. The e brake symbol will turn into yellow if position hold is active. As current is drawn from battery the charge needs to be at least 10% for position hold with e brakes. If below 10% SBC activation is prohibited and SBC button turns red. If SBC is activated and charging state drops below 10%  the e  brake symbol turns red as to warn the driver and to request to take over braking manually. If driver has taken over manually braking SBC button turns red and battery needs to be charged again above 10% for SBC. E braking symbol still turns to green while brake lever is pulled if velocity is above 10 km/h and thus recuperation can be executed till 98% charging state. 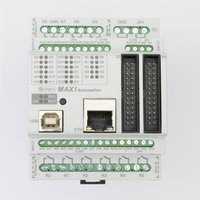 The Controllino Maxi Automation is used as PLC for the vehicle. Via adaptor PCB the PLC communicates over I²C,UART and SPI.

Further information can be obtained from 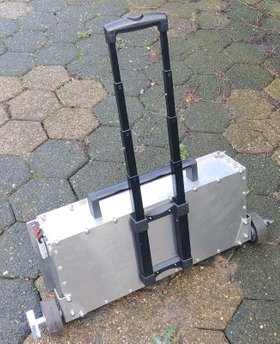 Our current prototype is construed as multi purpose vehicle(MPV). In upper figure one can see the two seater version.

In comparison to our prior prototype the electrive drive is in the rear realized by two BLDC hubmotors with Halbach magnetic array.

In this version the total net weight is 100 kg including battery. The battery with BLE BMS is contained in a IP 68 aluminium body with extractable grip, can be pulled out via a rail system and moved away via adjustable wheels.

The electric charger (IP68) can be attached to the vehicle or be removed together with the battery for externally charging at 45 Amps at a standard AC house connection. The maximum charging time is around 2.5 hours. Removal of battery is recommended to protect against theft but also at temperatures below 5°C at longer inactivity. A temperature from 20 up to 27°C is optimal for charge/discharge. The battery capacity is generously chosen that large as to allow full acceleration performance at temperatures down to -10 °C. However, at temperatures below 5°C reduced range has got to be expected.

The remaining charge is estimated by first the integration of current over time and second by adjusting over the state of charge (SOC) as function of the sequential arithmetic mean of voltage of a LiFePO4 battery if the current becomes negligible( idle state). The voltage is depending on the ambient temperature. Thus with measuring the voltage the influence of temperature is taken in account as well. It is possible that a SOC of less than 100% is displayed although the charger has just finished charging after reaching the maximum voltage of the battery( 16s is about 58.6V).  Another important fact is the degradation of the  battery which causes an increasing voltage drop in a shorter period of time and thus a stronger decrease of the SOC. Under consideration of the prior mentioned the possible mileage can be instantenously adjusted.

The maximum output current of the battery is 250 A and maximum deliverable power is around 12.5 kW at a maximum torque of 200 Nm. Maximum acceleration at a max. street legal weight of 300 kg is 1 g and 45 kph can be reached after two seconds(limited due to tire traction). Maximum mechanical drive power is limited by EU guidelines for category L1e to 4 kW. At moderate manner of driving a range of 200 km  can be achieved.

An electrical  stearing assistance can be implemented by a linear axis for autonomous drive or in case of disabilities. The electrical brake or recuperation can be regulated with the twist grip by pulling one of the brake levers. Braking torque is currently limited by the charging state of the battery. It would be possible to circumvent the use of the disc brakes if a cascade of heat resistors transforms the kinetic brake energy into heat if battery is more than 98% charged.

The cruise control can be enabled by a button on top of the display housing. Velocity can be maintained by recuperation or torque adjustments of the rear wheels.

The vehicle parameters can be viewed and changed via a side mounted 4,7" touch panel. The display is equipped with a sun shield allowing good readings at daily sun light.

A smartphone can be fixed in the front and charged via USB port(two 5V 2A). Thus navigation by using a bluetooth helmet with head speakers is convenient and not distracting from traffic.

The front wheel has got a 20" Schwalbe Big Ben tire and the rear ones 24" Schwalbe Crazy Bob.

The entire concept is modular. The central control unit embedded in a removable maintenance friendly box consists out of a PLC which communicates via I²C,UART or SPI with the sensors and data logger. The drive power can be adjusted to varying needs by using different motor controllers. There is no need to exchange the sensors.

The seats are decoupled from vibrations and shocks via silent blocks and the rear axis is equipped with a shock absorber at the mid axis linkage.

The vehicle declines into a curve together with the driver as to optimize the center of mass towards the inner side of the curve guarenteeing higher velocities in case of cornering.

For mechanical braking three hydraulic disc brakes with a diameter of 203 mm can be used and allow a relatively short braking distance of 10 m from 45 kph down to 0 at the maximum weight of 300 kg.

Further variants of the MPV are a pallet and a box with or without solar roof and cooling function.

BLDC controller settings can be changed via smartphone. Battery charging state and vehicle start can be managed with BLE communication as well.  While start up sequential blinker are activated for better relocation of the vehicle even at the dark.

Conventionally the vehicle can be started with a key switch and entering a code on the display. A brake disc lock can be attached and GPS Tracking can be activated for theft protection.